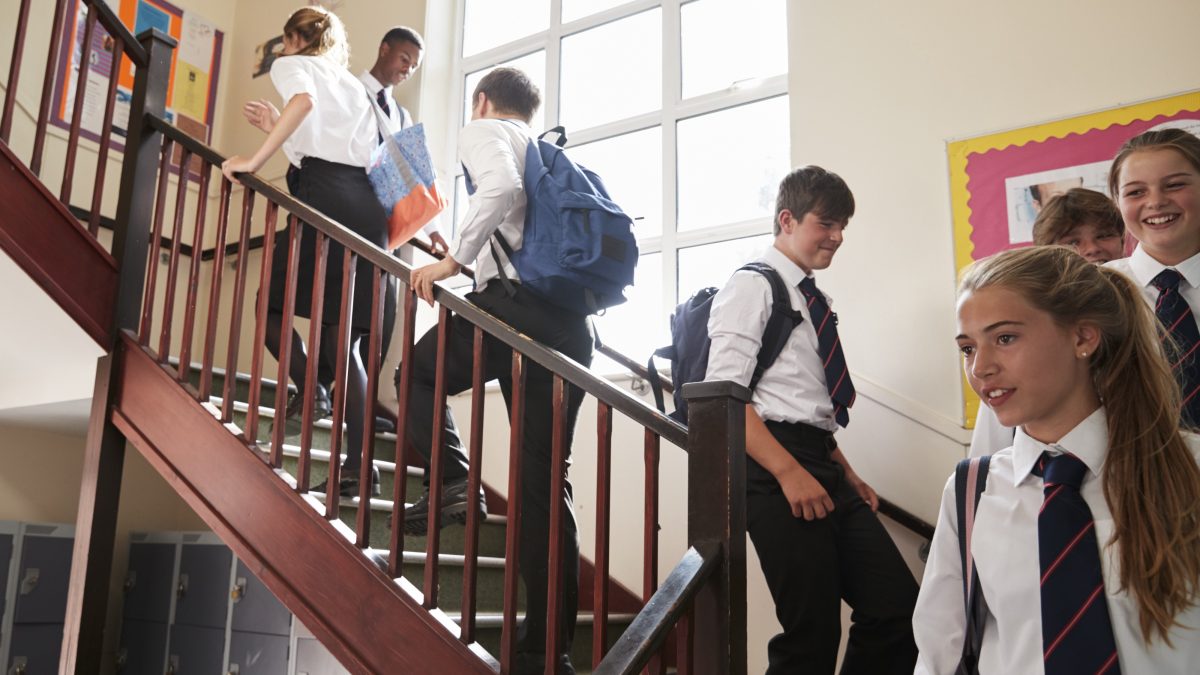 At a recent meeting of our high school’s Gay Straight Alliance Club, a young gay student (let’s call him Roland) steered the conversation in an unexpected direction. Roland needed to unload a bit: he confessed that he was having a hard time in his Theology class on Roman Catholic Sacraments; not academically, but emotionally. As the class discussed foundational Christian practices like baptism, holy orders, and marriage, Roland felt increasingly ostracized from the material.

Though Roland calls himself a (Protestant) Christian, he was beginning to think that the God he loved did not love him back in the same way.

“I just have so many questions,” Roland said. “I love Jesus, but I am not baptized, and the Church doesn’t want me to get married.”

He told us that he probed his Theology teacher with almost daily questions on these topics. Will I go to hell if I’m not baptized? Can I still go to church if I marry another man? The teacher, he said, responded by pointing him to a catechism. Roland was less-than-consoled.

This wasn’t the first time that he’d had a difficult time in Theology class. Last year, his teacher was fond of holding classroom debates on controversial topics. Though the teacher saw himself as a detached, unbiased observer in these debates, Roland felt that the debates became forums for students to confidently air their prejudices, seemingly supported by the teacher and the material. When the class debated gay marriage, LGBTQ students stayed fearfully silent, while others felt empowered to describe their discomfort with LGBTQ people. When they debated women in the clergy, most of the girls in the room were silent, while the boys by and large told the room that they found it hard to trust women in positions of authority. Obviously, these debates had not served to help students learn, but instead to make students feel unwanted.

I spoke with each of these teachers after I learned about these incidents. What had been the intent of these lessons? Were the learning outcomes achieved? Did they know the effects these lessons and these pedagogies were having on their already marginalized students? For the most part, each teacher had much the same response. This was a Catholic school, these were Theology classrooms, and the Catholic Church’s position on these issues is clear.

Neither teacher felt empowered or inclined to disagree with or challenge the Church’s stance, and each felt obliged to teach theology as is. I wanted the teachers to consider the position of the students, but they wanted me to consider their position as catechetical instructors.

These are the positions of the Church and these are the debates currently being held by the faithful. Who were they to teach otherwise?

At the time, I was hard-pressed to remedy this impasse. But I found myself thinking about these topics again after a recent meeting of our Institute for Islamic Christian and Jewish Studies (ICJS) teaching cohort.

In our meeting, we were treated to a wonderful introductory lesson on Christianity. As a teacher of theology, I never tire of these introductory lessons, though by now I’ve sat through more than I can count. When you’ve studied religion for a long while, or even lived and practiced religion for a long while, it can be hard to condense a complex and multifaceted faith into a brief and digestible introduction. I love watching people solve this little teaching puzzle.

This particular intro lesson was masterful, focused on the long history of theological debate within the Christian tradition, complete with interweaving graphs and charts, and scattered with seemingly arcane phrases like sola scriptura and filioque. As a scholar of Christian history, I saw my own education reflected in this lesson. This was how Christianity was taught to me as a student. This is how most textbooks present Christianity to students. And this is how our school’s content benchmarks ask us to teach Christianity to our students. In short, Christianity is its theology, and to understand the religion, you must understand how certain theologies became orthodoxies and how some became heresies.

But in this particular introductory lesson, I kept thinking about Roland. Specifically, I kept trying to find Roland in the twists and turns of this theological history. Sure, this was just an intro lesson, but what lesson would come after that? Would Roland find himself in that one? Or would it be the lesson after that? How far down the line would we have to go before he could see himself in this lesson plan? And if he did find himself, would it be an image of himself with which he would identify, or one too warped by exclusionary orthodoxies?

It’s easy to think this is just about one student or even one social identity, but there are all kinds of Christian-identifying folk who don’t fit into this theological approach to teaching: devout students from single-parent households grappling with the Church’s position on divorce; students from charismatic churches who rarely pick up the scriptures; young women told that they can never inhabit the person of Christ the way a man can.

If we insist on holding close to orthodoxy, if we insist on teaching only theology, then we leave out so many real, practicing religious people who don’t completely fall into step with that theology. I’d be willing to bet that most people do not align easily with that orthodoxy. That doesn’t make them any less sincere in their belief and devotion.

We know why we are compelled to teach mainline theologies. Sometimes it’s because a higher administrative power has asked us to do so. Sometimes it’s because our textbooks present information that way as well. But let’s also be honest with ourselves: part of it is just that it’s easier. It is so much easier to teach students about clean, clearly-delineated theologies than it is to teach them about the messy, quotidian, lived experiences of real, faithful practitioners.

It is not just easier to teach, but easier to learn on the student’s end too. It is tricky to make sense, especially for young students, of the gay Catholic in the back row of Mass, refusing communion, fighting every day to exist in a Church that does not fully want him. It is difficult to make sense of excommunicated women priests who continue to hold services. It is difficult to talk about the young American Jewish person who aligns her sympathies with Palestine, or the Muslim man who drinks and eats pork, or the Buddhist who treats a bodhisattva as a god. As I often tell my college students, if I begin a sentence with “This religion believes,” you should assume that the end of that sentence is “except for all the practitioners who don’t.”

We have to put faith in our students, trusting that they handle the complex lives of religious people, both those on the fringe and those in the theological center. We have to show them that in fact most religious people do not completely line up with “on paper” orthodoxy. And we have to do this by committing to teaching more than theology. It’s dishonest to pretend that the lives of Muslims can be understood by a straightforward discussion of the 5 pillars, dishonest to pretend that Judaism can be summed up by Torah and Talmud, dishonest to think that Catholicism is merely the Catechism. We as teachers need to commit to showing students the messiness that comes with living out a faith, showing them real people like them with whom they can identify and empathize.

It may prove to be an uncomfortable undertaking for us as teachers, but only by embracing this messiness can we be truly just to the students in our room and to the religious people we present to them.

Chase de Saint-Félix is Chair of Theology at Cristo Rey Jesuit High School and Adjunct Instructor of Philosophy and Religion at American University. de Saint-Félix was a member of the 2018-19 ICJS Teachers Fellowship.