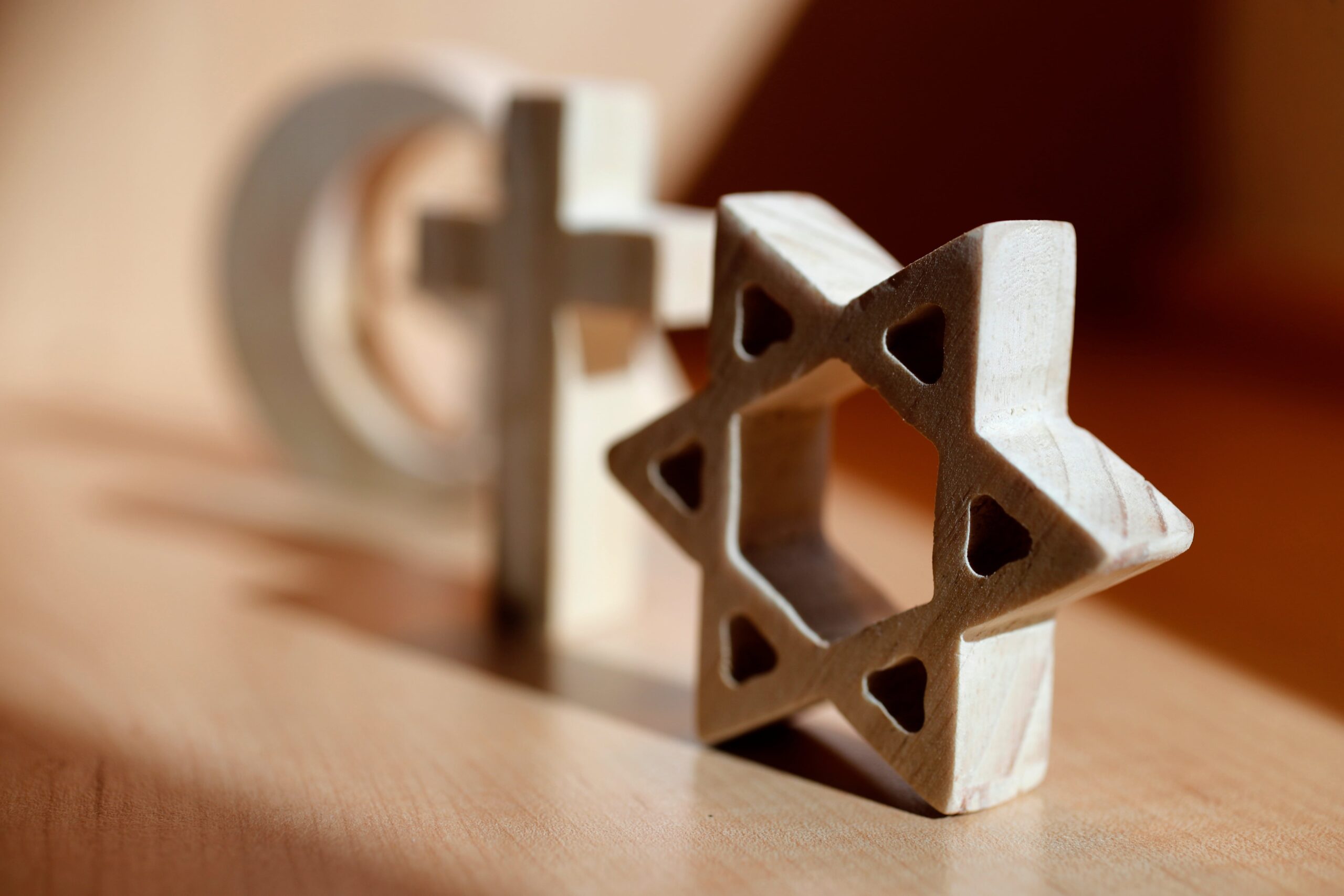 I am proud of my Judaism, but I wear it quietly. In the USA I have had years of developing an understanding of my identity as a minority outsider—years of growing up with the view that religious belief belongs in the private sphere, shared gently and carefully among those of one’s own faith. I am a firm believer in the separation of church and state. My ancestors arrived on American shores in the late 19thcentury, fleeing state religious persecution in Russia. They were some of the lucky ones to have emigrated before the horrors of the Holocaust. I am a third-generation American Jew.

It was bringing up my children in the UK, however (a country where there is no separation between church and state) that I seriously confronted my religious difference from dominant culture for the first time. This was not a question of my personal belief, but of living in the world as a Jew. This was a matter, too, of figuring out how to raise the kids in that environment where, suddenly, choices had to be made, faith announced. The children’s school, the only public education option available locally, was a Church of England school. On the first day of religious education class, each child was asked whether they were a “believer.” They were told by teachers that “we all worship the same God.”

There were, thankfully, only a few instances where my children faced taunts from their peers or comments about their salvational destination (and were told it was going to be hell). Their schools were, in the main, inviting: the Head Teacher knew we were Jewish, and I was asked to come in to present to the class about Jewish religious holidays. My kids’ classmates loved eating challah as I explained Shabbat; played getting married under a chuppa to learn about Jewish ritual; and munched on matzah in a lesson on Pesach.

Nonetheless, the approved mandatory culture for education was Christian. There were the weekly visits from Father Darren; there were regular church services at the beautiful St Andrew’s Parish Church, with its Norman Arch; there were prayers at assembly (during which my children were told to pray with their hands together and eyes closed). And there was the Nativity play for the first graders. The other parents were shocked that I’d never seen a Nativity play, did not know what one was. It came to a conversation with my husband, child, and Head Teacher to decide whether to participate. We were free to sit it out, we were told. Two Muslim children in the grade did so. However, my son felt it was okay, wanted to be part of the energy, did not want to be singled out. On the day, in St Andrew’s Church, site of Christian worship for over a thousand years, he proudly played his role­—holding up the Star of Bethlehem.

I had a broken shoulder, and it was my first time out of the house. The experience was painful and, in more than one way, a mixed one. This was not antisemitism, per se; it was a recognition of our minority status within our shared community of friendship. But it was also something wider, and something more disheartening: a belief that it would take vigilance to maintain religious identity in the company of a dominant religion that also considered its universal teaching to encompass all other religions.

I choose to enter the interfaith space, then, with some woundedness, some reluctance, and, as I have come to discover, some prejudice. I know one goal of interfaith communication is finding shared meaning, but I am relieved to find out that it is also to highlight understandings of difference. Through the monthly ICJS meetings, but most of all in our project group, where my synagogue is paired with a Jesuit Catholic parish, I have been learning how to communicate across difference. It is hard for me to open up to these new capacities to interact with others on matters evoking deep personal and spiritual conviction, but I am trying. With the cohort from St. Ignatius, I have been coming to see how there are commonalities, and also how honoring differences creates more space for our fullest selves. I have ventured out of my comfort zone to begin the journey of listening. It’s hard: I bear these generational scars and I carry strong political commitments that shape the ways I am open. So I appreciate the safe spaces to build trust. That’s what the ICJS Fellowship has meant to me.

Opinions expressed in blog posts by the ICJS Congregational Leader Fellows are solely the author’s. ICJS welcomes a diversity of opinions and perspectives.