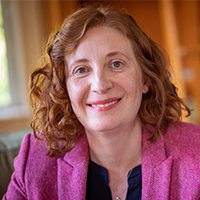 Heather Miller Rubens is the Executive Director and Roman Catholic Scholar at the Institute for Islamic, Christian, and Jewish Studies (ICJS). She is responsible for advancing the organization’s vision to build an interreligious society in which dialogue replaces division, friendship overcomes fear, and education eradicates ignorance. Rubens is an experienced teacher, public speaker, facilitator, and practitioner of interreligious learning and dialogue. She develops educational initiatives that foster interreligious learning and conversation for the public in the Baltimore-Washington corridor and online. Rubens is a member of the Committee on Ethics, Religion and the Holocaust at the United States Holocaust Memorial Museum, a board member of the Washington Theological Consortium, and an invited member of the Christian Scholars Group. She has served in leadership positions with the Council of Centers on Jewish-Christian Relations and the Catholic Theological Society of America. She is a member of the 2019 Class of The Baltimore Leadership. Rubens holds degrees from Georgetown University (B.A.), the Oxford Centre for Hebrew and Jewish Studies (G.Dip.), and the University of Chicago (A.M. and Ph.D.). In her research and writing Rubens creatively focuses on the theoretical, theological, ethical, and political implications of affirming religious diversity and building an interreligious society.

Article, “Has Antisemitism Been Uprooted from Christianity? A Catholic Response – A Forum in Response to John Pawlikowski” Antisemitism Studies (anticipated Fall 2022)

Service to the Field

Journal of Interreligious Studies
Board of Advisors (September 2021 – present)

Essay, “To Remember & To Avoid, Ten Lessons for Today,” in Seelisberg@75, the 75th Anniversary of the Seelisberg Conference, International Council of Christians and Jews, (2022).

“Going up to the Mountain of the Lord: A Call for Intersectional Interreligious Justice” (online forum) American Religion

“‘Something has Gone Wrong’: The JFS Case and Defining Jewish Identity in the Courtroom” Maryland Journal of International Law 29 (2014) p. 366-418.

“Interreligious Dialogue in a Post-Nostra Aetate Church: The Tension between Mutuality and Evangelization” in Visions of Hope: Emerging Theologians Envision the Future of the Church: 50 Years After Vatican II, Kevin Ahern, ed. (Orbis Books, 2013).

“The JFS Case: The Supreme Court of the United Kingdom and Jewish Identity – A Case Study” for Politics of Religious Freedom: Contested Norms & Local Practices based at the University of California, Berkeley and Northwestern University.

ICJS Jewish, Christian, and Muslim scholars share reflections and insights on how 9/11 events shaped their personal religious life and their professional interests.

Toward an Interreligious City: A Case Study

Centering and prioritizing the link between democracy and the interreligious society is critical.

“Catholicism and Culture” podcast, hosted by Dr. Stuart Squires at University of St. Thomas Houston, to discuss the history and goals of interreligious dialogue, Pope Francis, Judaism, and more.