The Tributaries of Justice 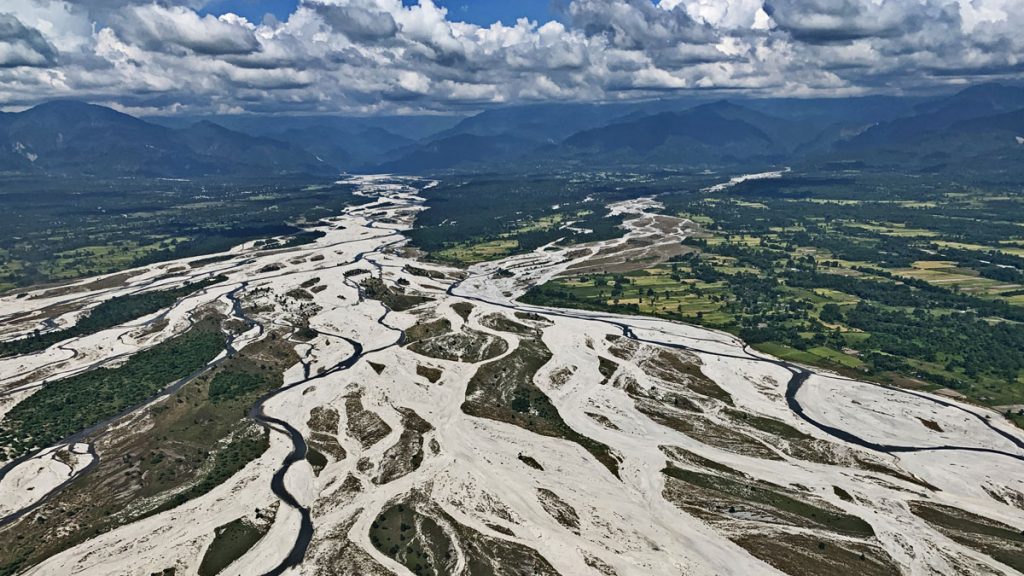 What water justice is and looks like is as fluid as water itself—literally and metaphorically. As we reflect on the first half of the 2020 ICJS Justice Leaders’ Fellowship, our world is currently drifting in a seemingly unforgiving flood of chaos. Whether we are being tossed in the relentless sea of alternative facts, raging economic displacement, and waves of sensationalism spewed by media outlets, or we are being swept away by the rampaging rivers of cold-blooded murders, legally sanctioned homicides, socially engineered divide-and-conquer tactics, or deprivation from the bare necessities of life, we are all drowning. Life rafts and boats are reserved for the top 10 percent, at best, and the common man or woman is expected to willingly succumb to the waters. All the latter results from a lack of water justice, a lack of reverence for the very essence of water.

In my culture, a mesh of Saponi and Tsalagi (Cherokee) traditions, as in my religion, Islam, the great primordial force, water, is quintessential to creation. “Have those who disbelieved not considered that the heavens and the earth were a joined entity, and We separated them and made from water every living thing? Then will they not believe?” (Qur’an, Surah Al-Anbya 21:30). Water is presented as a reflection and extension of Allah, a force of creation and benevolence, as well as a force of destruction and spite. This omnipotence is mirrored in the Jewish relationship between God and water, and is also echoed throughout Christianity.

In our studies of the Jewish faith, we learned that both God and Water existed together before the acts of creation. “When God began to create the heaven(s) [ha-shamayyim] and the earth, and the earth was welter and waste and darkness over the deep and God’s breath was hovering over the water(s) [ha-mayyim]” (Hebrew Bible, Genesis 1:1).

Life and the benefits of all people—be that physically, nutritionally, spiritually, or economically via trade and commerce—are dependent upon water. Thus, for a society to function adequately, all its members must have access to useful water.

In the hadith of Prophet Muhammad, peace be upon him, is a parable of two groups of people on a ship. Above the deck are those with full access to water, and below deck are the people who lack access. When left to fend for themselves the impoverished drill a hole in the bottom of the ship to obtain water to the detriment of everyone on board (Jami` at-Tirmidhi 2173). Therefore, it is concluded by the Prophet Muhammad (pbuh) that the privileged or well-to-do—those with access to water—must supply the have-nots with water, lest all perish. The latter is a form of “zakat,” or required charity, the third pillar of Islam.

In a like manner, the hadith of Prophet Noble Drew Ali, peace be upon him, says “A beggar people cannot develop the highest in them, nor can they attain to a genuine enjoyment of the spiritualities of life (Moorish Literature, p 20).” The begging people below deck can never be expected to contribute their best to their society. Subsequently, society at-large will never prosper without ruin. We see both sentiments reflected across the United States, throughout the American continent, and around the world. People who lack equitable access to bare necessities such as water often waste away in inhumane living conditions, rioting, looting, and/or risking their lives and the lives of their families and children for a chance at attaining not even the highest of themselves, but a basic means of survival, water.

Up until a recent point in time, privilege and the lack of privilege appeared only color-coded. However, privilege, by definition, is a grant or commission to do, say, or possess something or not.

When we look to our respective texts, privilege belongs to anyone who has placed their faith in God, the law thereof, and does not withhold just actions and duties. God’s capacity to revoke a privilege is implied both directly and indirectly throughout each scriptural reading we encountered. For instance, “Justice, justice, shall you pursue, so that you may live and take hold of the land that the Lord your God is about to give you” (Hebrew Bible, Deuteronomy. 16:19-20). This implies that an elevated lifestyle and land are privileges God bestows upon those who pursue justice.

“If you distort the testimony or refuse to give it, then ˹know that˺ Allah is certainly All-Aware of what you do” (Qur’an, Surah An-Nisa 4:135). Here it is implied that the privilege of Allah’s approval, benevolence, and mercy is at stake for those who distort Allah’s law.

“Beloved, never avenge yourselves, but leave room for the wrath of God; for it is written, ‘Vengeance is mine, I will repay, says the Lord’” (New Testament, Romans 12:16-19). The latter implies that although one’s enemies may prosper with an illusion of privilege or appear to get away with injustices at the expense of the righteous, they shall not escape the vengeance of God.

Justice so far as it depends on you

Many of my fellow justice leaders felt that the Christian text did not hold Christians to the same accountability as the Muslim and Jewish traditions. It is not hard to see the gulf that lies between the interpretation of the Qur’anic (“Stand firm for justice…” Surah An-Nisa 4:135) and Jewish verse (“Justice, justice, shall you pursue…” Deut. 16:19-20) and the Christian text. The Qur’anic and Jewish texts speak of one’s duty and requirement to pursue justice against one’s enemies, neighbors, and even relatives for wrongs committed whenever it is necessary. However, the Christian text appears to be much more passive and void of personal responsibility:

If it is possible, so far as it depends on you, live peaceably with all. Beloved, never avenge yourselves, but leave room for the wrath of God; for it is written, ‘Vengeance is mine, I will repay, says the Lord.’ (New Testament, Romans 12:18-19)

At its best, Romans 12:16-19, encourages charity, liberation, and even the forgiving of enemies which, at its core, is the makings of a just society. Yet, in the hands of the oppressor, it can serve as a loophole for passivity or ignorance toward justice.

Nevertheless, one of the most rewarding takeaways from this cohort is the focus on the historical context of the scriptural readings. Considering that the verse derives from Paul’s letter to the Roman church—the perpetrator of oppression against Jews and Gentiles at the time—it serves as a decree for justice rather than the actual application thereof.

Even Paul’s decree to the oppressive force of Rome is an instrument of privilege deriving from his position and status as a faith leader. His duty to God and the gospel of Jesus compels him not only to pursue Rome’s acceptance of his apostleship, but to intercede on behalf of his people and all facing injustices at the hands of the Roman church’s conquest.

In this manner, Paul echoes the duty of both Muslims and Jews as he stands firm on justice and pursues it by speaking to the solution for injustice. He ultimately is calling out the oppressive force of Rome and entreating it to cease its persecutions and change its unjust ways.

Working for the good of all faiths

Having spent this time getting to know my fellow cohort members and their respective faiths has further reinforced my belief that our three religions, being made up of various nations, differing creeds, and sometimes contrasting ideologies, are three sides of an equilateral pyramid beneath the apex that is one Great God.

The lens through which we view our world and its happenings is often skewed based on personal biases, preconceived notions, prejudices, misinformation, circumstances, and life experiences. However, when we embrace the highest faculties of our religious texts, teachings, and practices, and are willing to be held accountable—and hold our brothers and sisters of humanity accountable—to their faculties, change can commence, healing can begin, and ultimately social justice will become a precedence.

It is not my duty to find fault in the textual representations of justice. On the contrary, it is my duty to seek the good, even in its most minute form, or the lack thereof which can be transmuted into applicable good against injustice.

Like Paul, I cannot dictate the actions of another person’s interpretation or application of justice. Yet, I hold fast to the certainty that if we all pursue justice and stand firm on justice so far as it depends on each of us, God’s wrath will avenge all injustices.

I came into this fellowship wearing many occupational hats: teaching; administrating; blogging; and being a spoken-word artist. As the pandemic ramped up, one-by-one each occupation dissipated until I was left with only my voice and industriousness. Thus, I began focusing full-time on my voice, my poetry.

My voice has always been my agency, but even more so now. For the last two months, I have been able to collaborate with many artists, producers, and business owners on various projects. Each project has afforded me an opportunity to promote social justice, and often to speak from a unifying position, at times internationally and interreligiously.

As I continue to write and speak, I intend to encourage interfaith and multi-ideological dialogue and unity. Change happens within the hearts of each persona and creates ripple effects in lakes, ponds, and puddles, and waves and currents in rivers and oceans. I am using my voice to manifest those shifts and changes in tides so that we can all breathe and enjoy life, liberty, happiness, and justice when we emerge from this flood of chaos.

O’Dellshae Wiles Robinson El Bey is a spoken word artist Egypt English and an educator with Art with a Heart, and a  member of the 2020 ICJS Justice Leaders Fellowship.