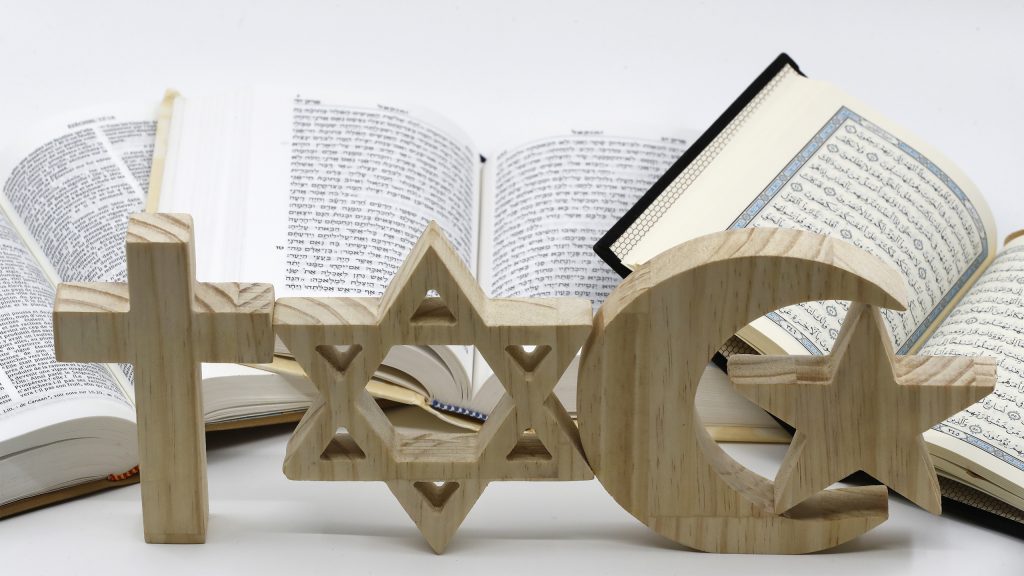 Faith has almost always been a comfort to me. Even when circumstances don’t turn out the way I think they would, and when it feels like I don’t understand God, I find myself turning to God over and over again.

Christianity has been the religion on which I have hung my hat; not out of choice, but by birth. For many years I have found myself comforted and known by the God revealed in Christian Scriptures. At the same time, I was fascinated by Judaism as a teenager, in part because of my Jewish friend who went on to be a Hillel rabbi. And, later on, when a certain interpretation of Christianity had failed me, and when I learned about Islam as a young adult, a light bulb went off. In Christianity we talk about submission to one another constantly, but Islam speaks of submission to God. The idea of letting go, of accepting what has happened and what will be, seems liberating.

Several years back when my book club read the widely popular God is Not One, we asked each other: which religions were we drawn to? I was the only one who answered Islam. It goes without saying that some people in the West are often afraid of Islam and Muslims. Television, wars, and the internet have too often made them the enemy. One cannot escape the anti-Muslim sentiment in this country. “Don’t they oppress women?,” is often the refrain.

The ICJS Congregational Leaders Fellowship (CLF) cohort has encouraged me to acknowledge this bias, work to address it, and foster a sense of what I will call “an opening,” which is an acknowledgement that truth is not contained in one religion. This acknowledgement transforms my thinking and understanding and allows me to seek truth that may be communicated in a different way. The people in the cohort, by virtue of their presence, have already taken on a sort of “opening,” and because of this our lives are enhanced when we become students of each other’s belief system and the kind of life it encourages and produces.

An “opening” can be a scary thing, however. We can begin to question why we believe what we believe or wonder if we ever really believed it at all. The scholars at ICJS are excellent in helping model belief in one’s own system while investigating the religion of another. They make it look less scary—perhaps because they find it more exciting than scary, that there are similarities amidst the great differences.

It might also be the case, as they model interreligious dialogue for us, that they’ve already acknowledged the “elephant in the room,” the fear that one would lose salvation or their faith while listening to the truths found in another religion. As my time in the cohort progresses, I find my own sense of identity shifting slightly. Because of the sustained conversation over the course of this year, and working together on a project with three congregations representing the Abrahamic faith traditions, I am repeatedly reminded that I have dedicated a small part of my life to interreligious dialogue this year. There have also been many opportunities outside of the cohort that have only bolstered my dedication to this dialogue.

As we turn to the fall, however, and I begin to engage my own congregation with questions and ideas of interreligious dialogue, I realize that it would be wrong for me to keep my learning to myself. As a leader, and even more as a human, I have a responsibility to encourage respectful conversation about differing religious beliefs.

It is indeed a wonderful coincidence that in the last year, as minister of outreach at our church, I have begun working more with the Muslim charity in North College Park. We have figured out how to partner in various ways and I have learned so much. For years, I heard stories about the Muslim community doing outreach to homeless neighbors on Christmas or other Christian holidays, but this was the first time I saw in person the compassion that the Muslim community extends to the wider community as its practice and act of worship. One of the results of this relationship with the Muslim charity was an invitation to the house of a family that is very involved with the charity work. During my visit to their home, Imam Azad said, “Everything we do is worship.” It was a beautiful statement, representing what I want my faith to be.