God on the Ballot? A Discussion of Christian Nationalism on the Eve of the Election

Past Events
A panel discussion on Christian nationalism, its impact on the midterm elections as well as how it stands to influence the presidential elections in 2024. The panel included sociologists Philip S. Gorski of Yale University and Samuel L. Perry of the University of Oklahoma, co-authors of The Flag and the Cross: White Christian Nationalism and the Threat to American Democracy, along with ICJS scholar Matthew D. Taylor and Amir Hussain of Loyola Marymount University. The event was sponsored by ICJS and two Catholic University of America co-sponsors: the Department of Sociology and the Institute for Interreligious Study and Dialogue. 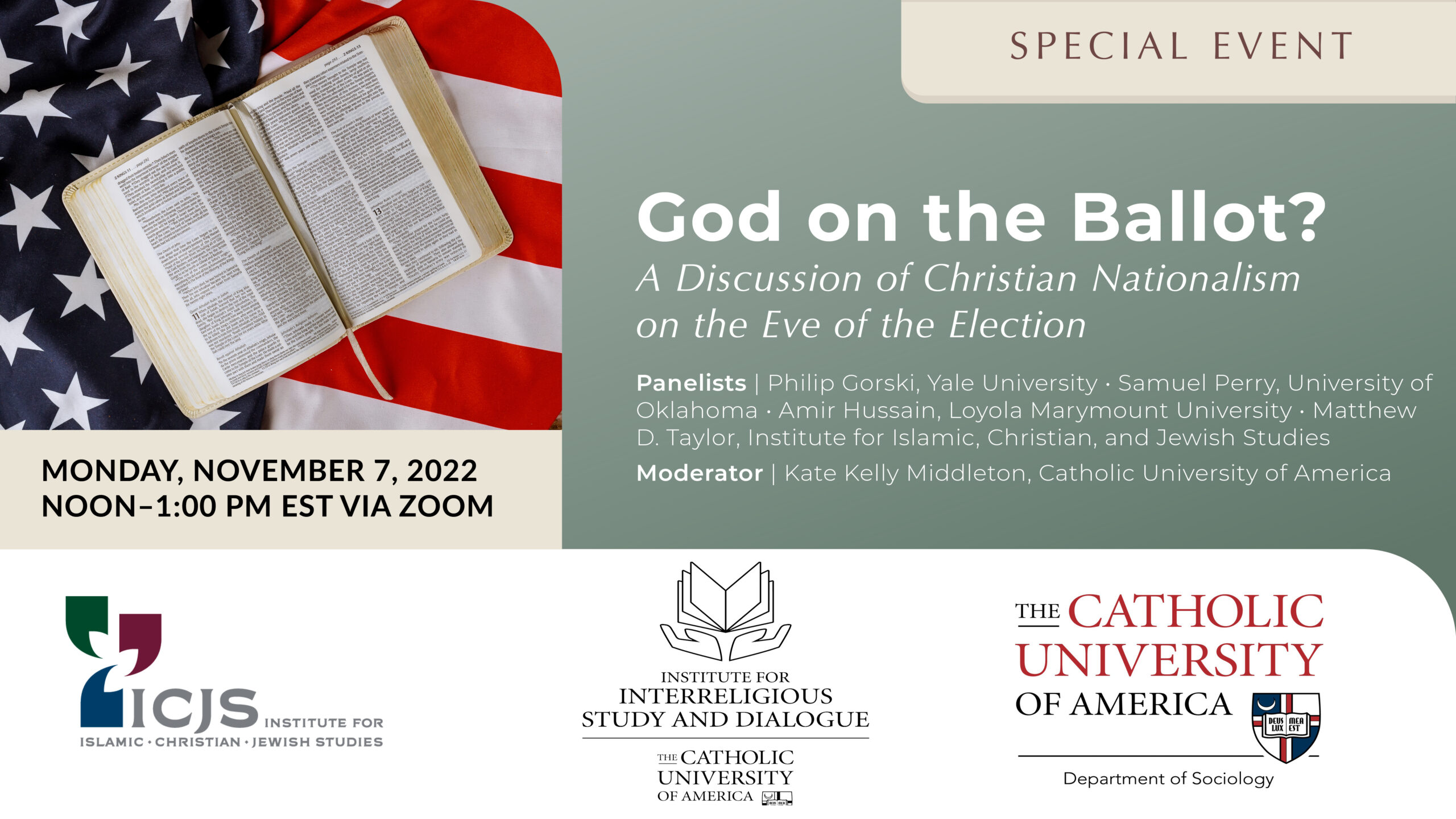 Philip S. Gorski (Ph.D. University of California, Berkeley 1996) is a comparative-historical sociologist with strong interests in theory and methods and in modern and early modern Europe. His empirical work focuses on topics such as state-formation, nationalism, revolution, economic development and secularization with particular attention to the interaction of religion and politics.

An award-winning scholar and teacher, Dr. Perry is among the nation’s leading experts on conservative Christianity and American politics, race, sexuality, and families. Along with numerous articles published in leading academic journals, Dr. Perry has also authored or co-authored four books.

Dr. Amir Hussain is Chair and Professor of Theological Studies at Loyola Marymount University in Los Angeles, where he teaches courses on religion. His own particular speciality is the study of Islam, focusing on contemporary Muslim societies in North America.

Matthew D. Taylor, Ph.D., is the Protestant Scholar at ICJS, where he specializes in Muslim-Christian dialogue, Evangelical and Pentecostal movements, religious politics in the U.S., and American Islam. Prior to coming to ICJS, Taylor served on the faculty of Georgetown University and The George Washington University, and he is currently a faculty member in the Theology Department at Loyola University Maryland.

Moderated by Kate Kelly Middleton of the Catholic University of America

Kate Kelly Middleton is a Navy veteran and Ph.D. student in religion and culture at Catholic University of America, pursuing an interdisciplinary study of the role of religion in ethical decision making and meaning-making. She specifically focuses on comparative theologies of hope.